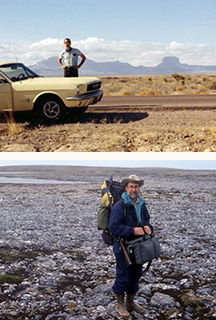 It is rewarding for natural scientists to learn to know the living reality of our natural environment.

With the aim of finding examples for bio-mimetic studies as an additional motive I visited wilderness areas all over the world. Highlights were nature areas along the pan-American highway, the Galapagos Islands, the Amazon basin, Gran Chaco and Patagonia.

In Africa I did not only visit  wildlife parks  between Kenia and Namibia, but made research in the Namib and Kalahari desert.

Trecking in the Himalaya both on Nepalese and Tibetan territory I studied adaptations to harsch environments.

Central Asiatic mountains and deserts I learned to know by travelling along the silk road between Pakistan and Beijing.

My interest was also attracted by numerous natural areas in Australia, New Zealand, and on Pacific Islands.

One expedition I conducted to Bear Island in the arctic Barents Sea.

My exploration activity helped me in tackling relevant interdisciplinary challenges. I have the impression that our global problems have to be solved on the basis of realistic facts, on the basis of better understanding nature and the environment, and not only within a virtual reality approximation.

In 1980 I was elected fellow international of the Explorer`s Club in New York.

Fig.: 1968 on route 66 to California (above). In the USA especially the national parks attracted me.

1990 I led an expedition to the arctic Bear Island (below). The aim was to study fossils of the first tall trees (they grew 360 Mio years ago), in order to find out, how they learned to pull water up to the tree-tops using solar energy.