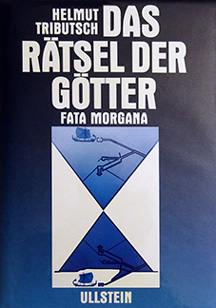 When I looked along one of the huge canals dug into the Nazca plain, I happened to see a desert mirage. There was the illusion of a large lake in the desert. It was during the appearance of the warm stream “El nino”, that finally allows clouds to reach the Andean mountains for rainfall. I was convinced that the Nazca people symbolically attempted to withdraw the mirage water from the desert. A mirage sight as a stimulus for spiritual immagination? Mirages, in fact, are the only natural phenomena, that provide the illusion of another world. This is especially true for the superiour mirage, which over a cool ground projects landscapes into the sky. When an inversion of air density is present, even triple worlds are seen. Can this have been the model for the trinity idea in numerous religions and mythologies? I decided to learn everything I could on optical mirages and found that large scale monuments on earth, such as pyramids, megalith arrays and the Nazca lines, could be interpreted as observatories of mirages. The latter were considered to belong to the other world, and they were also useful for weather forecasting. Oll together the experience resulted, that numerous ancient monuments, many mythologies and religious mysteries, were inspired by really encountered but wrongly interpreted natural mirage phenomena.