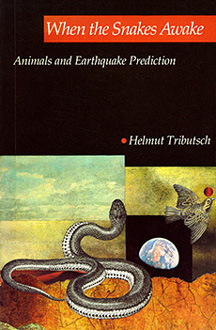 When the Snakes Awake: Animals and Earthquake Prediction
(Book Ref. 2)

When, after the 1976 Friuli earthquake, I returned to my home village to help my parents a neighbouring peasant woman provoked me by saying: “You are a scientist. Tell me: why did our cows know before, and why we had no idea?” At that time I was very confused. But due to the tragedy witnessed I decided to work hard investigating animal earthquake precursors and tracing down all available historical documents to find out whether one is dealing with a natural phenomenon or just a traumatic illusion. The book is the result. It reports many remarkable observations. From 78 earthquake documents collected from civilizations around the world I deduced that popular tradition has always simultaneusly reported three earthquake precursors, animal unrest, strange meteorological conditions, and luminous phenomena under clear sky. I concluded, that a gas containing charged particles, aerosols, is released from the earth. I also found out that since the time of the Greek scientist Aristotle, and during an astonishing period of two millenia, such a gas, called pneuma, was expected to induce precursors and the earthquake itself (which today we know is not correct). But a precursor, a thermal anomaly, or a gas is now also seen from satellites, when the infrared radiation from the earth is scanned. It coincides with the time pattern of animal precursors and has already been observed prior to two dozen major earthquakes. My expectation is that in the future the popular earthquake experience will turn out to be relevant (compare Ref 441 of publication list).