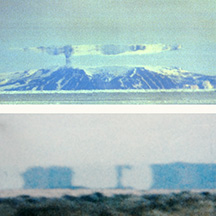 Mirages: Prototypes for religion and mythology

In 1980 near Christmas, travelling on a local bus from a professional commitment in a copper mine in southern Peru north through the Nazca desert, I asked the driver to drop me at one of the famous huge stripes shaped by Nazca civilization. When looking along it towards the horizon I saw a huge lake, an optical mirage. This phenomenon of a desert mirage is the well known down projection of the blue sky and appears when looking over heated ground in still atmosphere (When looking over a cool ground the inverted phenomenon is occasionally seen, landscapes projected upside down into the sky). This mirage in the Nazca desert appeared because, due to the El Nino current, the strong wind had ceased. Seeing this illusion of water I felt I understood what the Nazca people were searching with their huge canals in the dry desert (the failing wind brings rain into the Andean mountains from where fresh river water arrives within two weeks) and decided to study everything I could find about mirages in relation to human imagination.  I realized that the only natural phenomenon that suggested another world to early humans, which could not be understood as an environmental phenomenon, became a rich source of inspirations for mythology and religion. Three books resulted (Books Ref. 4, 5, 6).

picture above: mountains seen over a cool plain projected into the sky (courtesy of A.Takeno, Tokyo)
picture below: Giraffe like mirage pattern on the horizon in Namibia (courtesy of Dr. Budack, Winhoek)