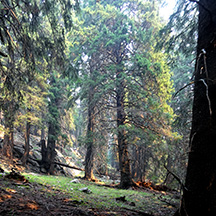 Since I was motivated by biomimetic research I concentrated on carbon dioxide fixation and biomass formation via (deep sea) bacteria. If one generates the simple inorganic chemical energy of primitive carbon dioxide fixating bacteria with solar energy, e.g. iron sulphide from iron sulphate, one obtains artificial biomass production with an efficiency much higher than that of traditional agriculture, and without need of fertile land (ref. 33, 341). Such a futuristic artificial biomass technology  I propose as part of a long-term strategy towards energy sustainability. My fundamental research was aimed at learning how to produce the metal sulphide energy of these bacteria from solar energy (ref. 265) and how these bacteria efficiently harvest this energy (ref. 296, 306, 370, 394)

Fig.: In this stony, ruffled mountain forest at 1700 m elevation I become especially aware of what nature has accomplished to extract carbon dioxide from the atmosphere