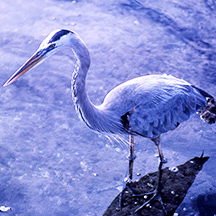 Water splitting with light is the fundamental process in photosynthesis. It is the energetic basis of higher life, since the energy carrying hydrogen, from the water, is finally attached to carbon dioxide for the production of carbohydrates.  In order to split water with light, one has to use catalyst materials, which helps to facilitate the process with low energy turnover.

I proposed and demonstrated a special class of catalysts, which, upon light absorption, modify their chemical bonding in such a way as to bind water species and to react with them. It can be described as water splitting via light induced coordination-chemical mechanisms (e.g. ref. 22, 53, 67, 89, 267). An example of such a photo-catalyst is ruthenium disulphide, RuS2. The strategy adopted was bio-mimetic. Also nature is using coordination- mechanisms for water splitting in the manganese complex of photosynthesis, which, however, is more sophisticated and applies the abundant transition metal manganese.  I also contributed to a record breaking laboratory experiment, in which with a 20% efficient solar cell and catalytic electrodes hydrogen was liberated from water with 18% solar energy efficiency (ref. 328).

Fig.: The heron has trained for a long time to separate the water to get his energy. Also science tries to get energy by splitting water. But the aim is to use sunrays to set hydrogen free from water molecules.